Dame Vivienne Westwood has suspended herself in a giant birdcage outside The Old Bailey to protest the extradition of Julian Assange to the US.

The British fashion designer and businesswoman led a colourful band of protesters chanting ‘Free Julian Assange’ outside the Old Bailey in central London.

Suspended inside the cage, she said: ‘Don’t extradite Assange – it’s a stitch-up.’

Using a megaphone outside the court this morning she said: ‘I am Julian Assange. I am the canary in the cage. If I die down the coal mine from poisonous gas, that’s the signal for all the miners to leave.

‘But I am half poisoned already from government corruption and gaming of the system and legal system by governments. I am still whistling away but 7 billion people don’t know what the f**k is going on.’

Assange, 48, is wanted in the US to face 17 charges under the Espionage Act and conspiracy to commit computer intrusion after the publication of hundreds of thousands of classified documents in 2010 and 2011. 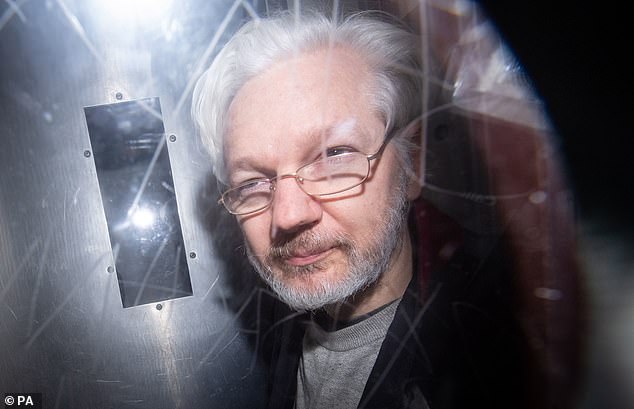 Assange, 48, is wanted in the US to face 17 charges under the Espionage Act and conspiracy to commit computer intrusion after the publication of hundreds of thousands of classified documents in 2010 and 2011 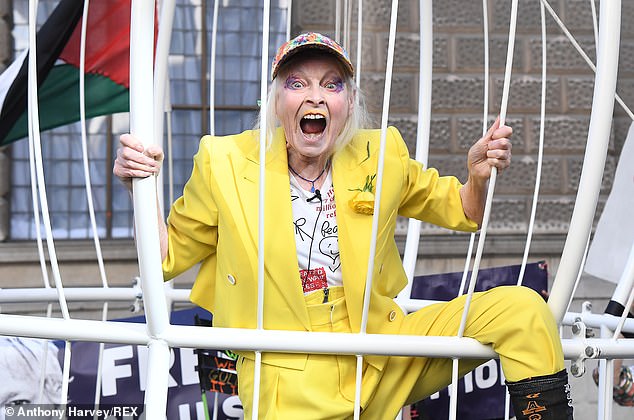 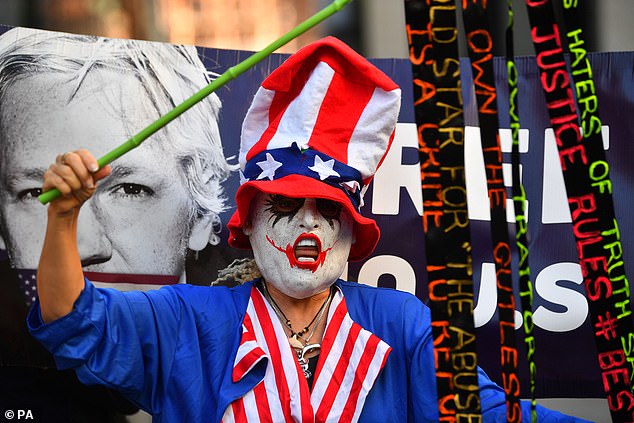 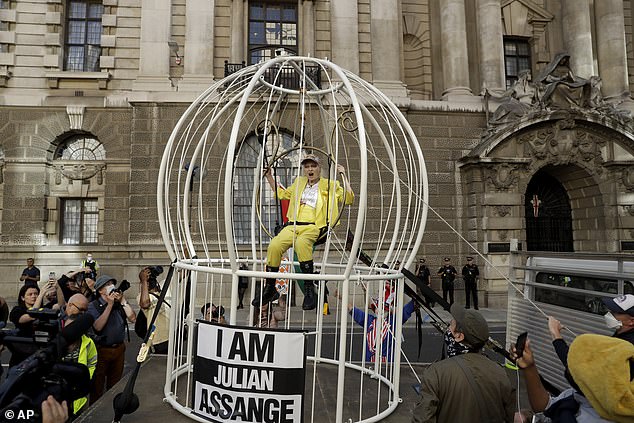 Westwood in the bird cage this morning with a large placard that says: ‘I am Julian Assange’

He is currently being held in London’s maximum-security Belmarsh prison while the court system tries to reschedule his extradition hearing, which was postponed due to the coronavirus pandemic.

Dozens of supporters gathered around the white cage this morning shouting slogans and calling for Assagne’s release.

City of London police officers and security guards from the Old Bailey were on standby as the protest spilled out onto the road.

The designer appeared on Good Morning Britain about her stunt that was designed by her son Joe Corre.

She said: ‘I am a canary and canaries are whistleblowers.

‘He did an amazing thing when he, in 2016, established WikiLeaks as a safe haven for whistleblowers. 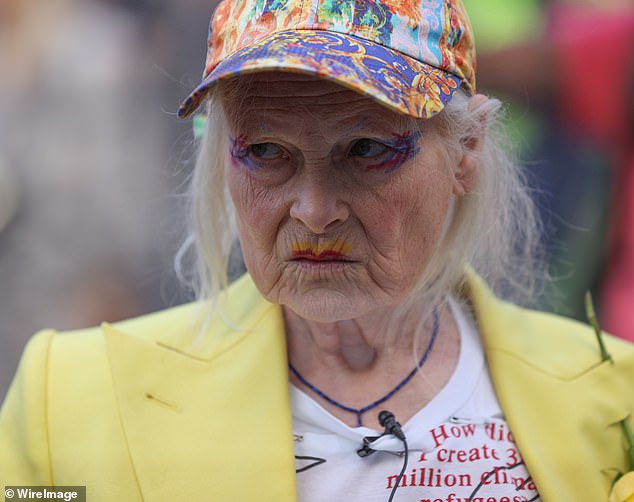 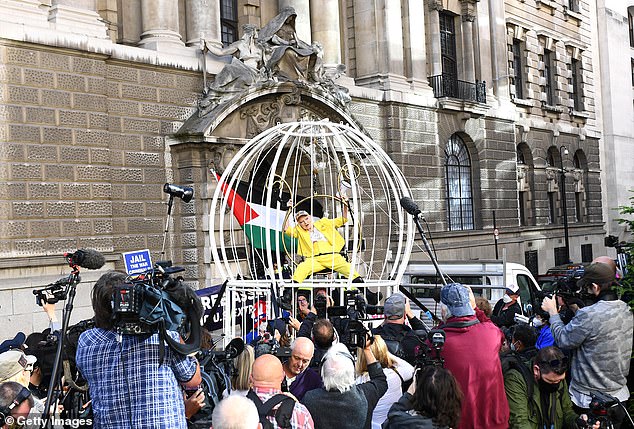 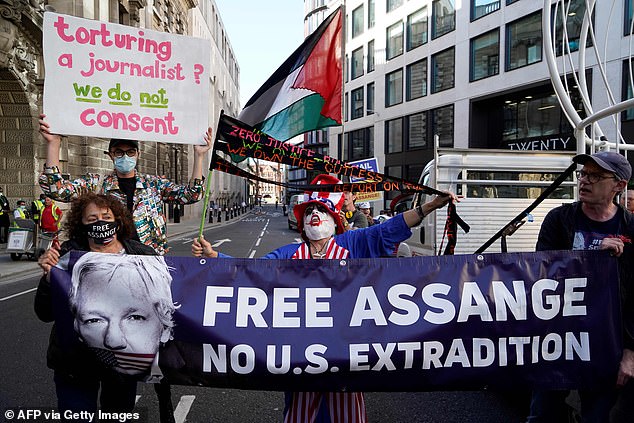 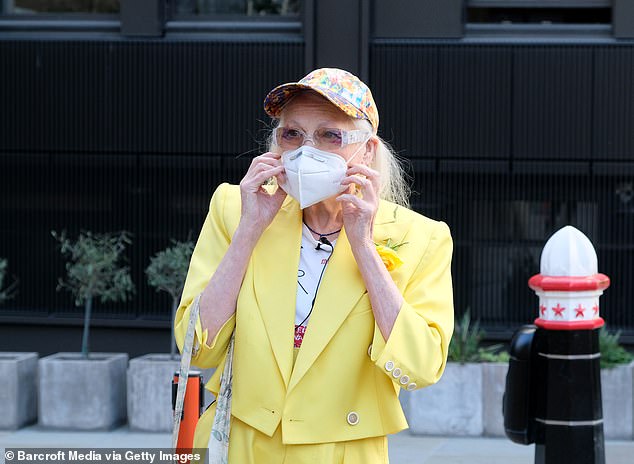 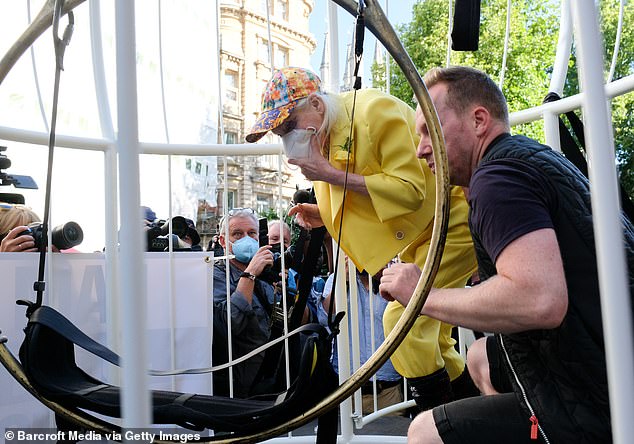 ‘We need the truth about Julian Assange and here I am sort of whistleblowing the truth.’

She added: ‘I am Julian Assange, I am the canary in the cage, he has been trapped by a big net, taken out of the sun and shoved in a cage.

‘The problem is they want to send him to America for a sentence of 175 years and stick him in a concrete block for a jail.

‘This could happen to every journalist because it is not a crime to publish the truth.’

Westwood’s activist son, Joe Corré, is behind the protest. Corré, who founded Agent Provocateur, turned down an MBE in 2007, in protest against the illegal war in Iraq that Tony Blair took Britain into. 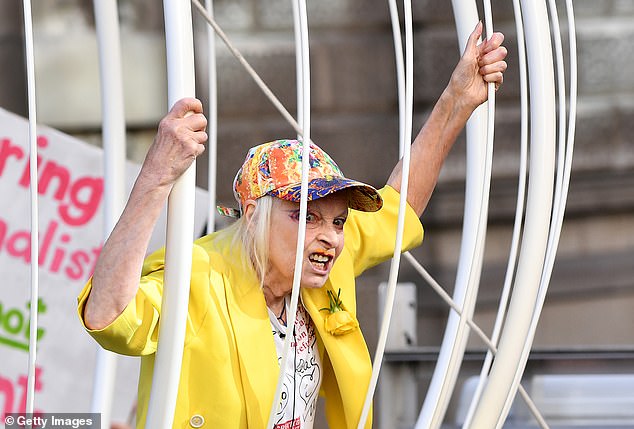 Joe Corré says: ‘Julian Assange is being persecuted for speaking the truth’.

‘The UK public and the international community must now urgently mobilise to shield him from the 175-year living death sentence awaiting him in the United States’.

‘Assange’s legal battle is the most important case in our time about press freedom, about whistleblowers, and about holding the powerful to account through the media’.

‘The media, the public, the judiciary, the politicians, should be outraged over his treatment’.

Assange’s full extradition hearing is set to take place on September 7, having originally been scheduled for May 18.

The WikiLeaks co-founder’s father John Shipton has previously said that extraditing his son to the US would be akin to a death sentence. 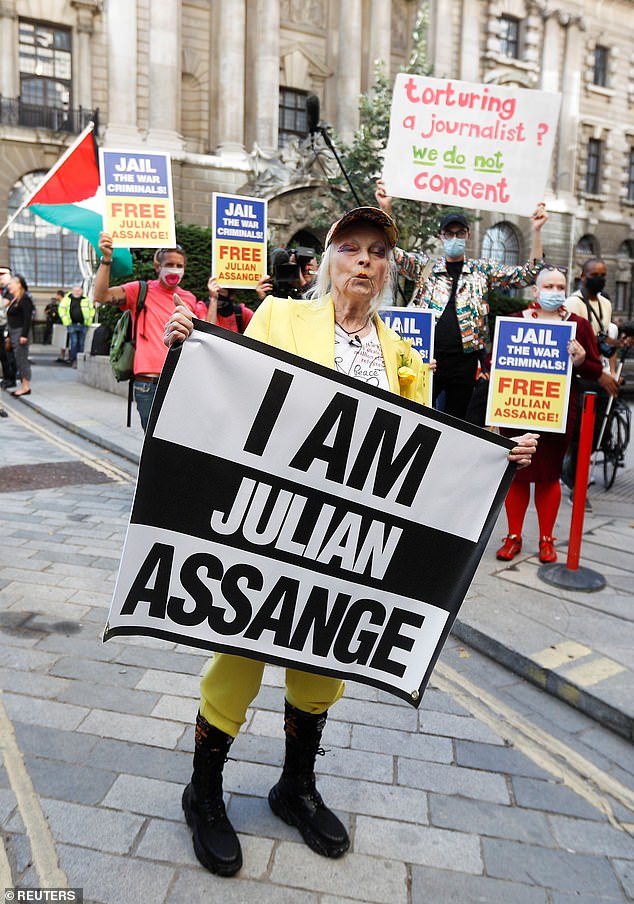 Following a media briefing in central London, in February this year, he said: ‘The extradition is a death sentence – it’s the culmination of 10 years of lies, physiological torture of every sort.

‘His condition has improved, I saw him last week.

‘They have a (fitness) schedule (at Belmarsh) – you could hardly say it’s fresh air.

‘It’s four walls with a grille on the top and you can stand in the rain.’

He added: ‘The extradition ought to be immediately dropped.

‘If that’s not done then the minister concerned can give me a ring and I’ll go out to the jail and pick up Julian as I have a home here … he has substantial support in the community so he can come home and fight his case from house arrest or bail. It’s no problem.’

'We need to do a better job for our employees', says Amazon boss Bezos
How Novavax Won $1.6 Billion to Make a Coronavirus Vaccine
Australia won't open its borders even AFTER everyone is vaccinated against Covid
Benefits of Digital Marketing for Your Business – 5 Massive Benefits for SMBs
Rolls-Royce hits new sales record in the first quarter as the wealthy demand luxury cars
One Dead In Paris Hospital Shooting, According To Multiple Reports
Remembering “Solyndra” – How Many $570M Green Energy Failures Are Hidden Inside Biden’s Instructure ...
Scientists Find Underwater Plants Can Combat Ocean Acidification
Harvey Weinstein Indicted On Sexual Assault Charges In Los Angeles
Use-of-force expert: Chauvin would know that Floyd was not resisting arrest
Share