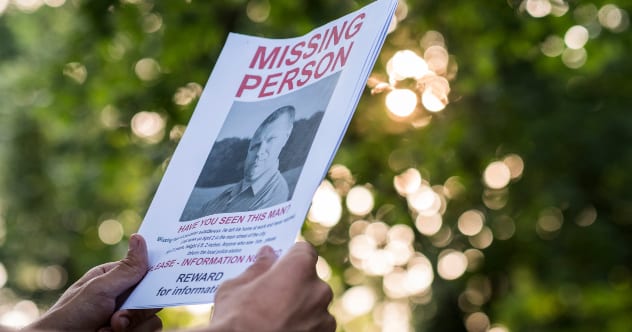 Over 30 years, the United States has averaged over 600,000 missing person cases per year. As the U.S. is only one of 195 countries globally and given that many missing persons are not reported, we can only guess at the number of people around the globe who go missing each year. It is certainly in the millions, and it is chilling to imagine just how high it may be.

Thankfully, many of the missing are quickly found—in the U.S., the vast majority are found within days. Many who go missing choose to do so to begin a new life. But given the sheer number of reported cases, there is still an unsettling amount of unsolved disappearances. In some of these unsolved cases, the clues left behind pose as many questions as they do answers, or support so many different theories that it’s impossible to decide on a conclusive answer.

This has left us armchair sleuths with a ton of frustrating dead-ends and tantalizing mysteries to pore over, in the hopes of finding those we’ve lost. Here are ten of those missing person cases whose mysteries persist to this day.

On October 21, 1978, pilot Frederich Valentich began a solo flight from Moorabbin, Victoria, Australia to nearby King Island, just one hour away. Though the weather that day was clear, sunny, and with little wind, he never reached his destination, his remains were never found, nor was any part of his plane ever recovered.

Partway through his trip, Valentich radioed Melbourne air traffic control and said that an unidentified aircraft was following him. They replied that no aircraft were in the area. He said that the other vehicle was playing games with him, hovering above his craft and keeping pace. He radioed again later to say that the aircraft was on top of him again, and was “not an aircraft.” Then his radio went silent for 17 seconds, followed by what was described as scraping, metallic sounds. UFO believers claim that Valentich was abducted, plane and all, by aliens. Others note Valentich’s own vocal belief in UFOs and believe he faked the crash. Still others cite his dubious flying record and posit that he simply crashed into the ocean. Either way, it is strange that no trace of either him or his plane were ever found.

All three members of the Jamison family disappeared in Red Oak, Oklahoma, on October 8, 2009, under a number of mysterious circumstances. Over four years later, their remains were found in the woods about three miles from their abandoned truck and were too decomposed to provide a conclusive cause of death.

The Jamisons were in the area scoping out a plot of land for a potential new homestead. The first indication that they were missing was when someone discovered their abandoned pickup truck on the side of the road, absent of Jamison’s but mysteriously containing their wallets, cellphones, IDs, around $32,000 in cash, and their family dog Maisie (who was thankfully still alive). Later, surveillance footage from the Jamison’s house was found and showed them on the day they last left their home, packing their car, their behavior described as “trance-like.” Theories abound as to why they went missing and how they died, including Satanic cults, ritual suicide, and a drug deal gone awry.

Like the Jamisons, Kris Kremers and Lisanne Froon went missing, and also like the Jamisons, their skeletal remains were found much later. Kris and Lisanne were Dutch students who were volunteering in Panama when they disappeared. On April 1, 2014, the two girls began hiking the El Pianista trail and were never seen alive again.

Lisanne’s backpack was found by a local ten weeks later. Among much of the two girls’ possessions, it contained both of their phones. Their phone records paint a scary picture. Within hours of the hike’s start, both girls tried calling 112 (the international emergency number) and 911 (the local emergency number) but did not have enough service to get through. There are many of these calls over ten days, though it appears Kris stop calling after only three, which many attribute to her having died first. Lisanne’s camera also contained cryptic clues, with over 90 photos taken of almost total darkness and a few that show rocks, an allegedly makeshift trail marker, and the back of Kris’s head, which many say looks to be injured. Whether the girls simply got lost in the jungle or were the victims of foul play, the details are still a mystery.

Brain Shaffer was seen on a security camera entering a bar on the night of March 31, 2006, in Columbus, Ohio, never left the club on camera, and was never seen again. Strangely, there was no easily accessible entrance/exit to the bar other than that which the camera faced. If/how he got out and where we went is a mystery.

Shaffer is seen on the camera talking to two women outside the bar around 2 am, reentering the bar, and never leaving again. The camera shows that every single person who entered the bar that night also left, except for Shaffer. Suspiciously, Brian’s friend William Florence- who was with Shaffer the night of his disappearance- refused to take a police lie detector test about that night. Most intriguingly, for months after Shaffer’s disappearance, his girlfriend called his phone every night before going to bed. Every night it went straight to voicemail… except for one night in September, when it rang three times before hanging up.

Daylenn Pua, known as Moke, was a native of the Big Island, Hawaii, who visited his grandmother in Oahu when he went missing. The young man had decided, against his grandmother’s wishes, to hike Oahu’s famed ‘Stairway to Heaven’ trail, which at the time was in a state of disrepair and illegal to hike.

Moke texted his family pictures of the trail as he hiked, showing off the beautiful views and lush flora. When Moke was declared missing, the pictures were pored over by his family. Hidden in the background of the very last photo Moke sent before his disappearance, they noticed something interesting. An adult man can be seen, just off the trail, partially crouched behind some vegetation. Naturally, his presence in Moke’s last ever photo raised suspicions, but no answer to Moke’s whereabouts or how we went missing have ever been found.

On Christmas Eve of 1945, the home of the Sodder family- George, Jennie, and nine of their ten children- burned down to ash and timbers. George and Jennie escaped with four of their children and assumed the remaining five had died in the blaze. However, when firefighters finally arrived and searched the house’s remnants, they found no trace of the five missing children- no bones, teeth, or any remnant.

There were many curious findings about the Sodder home. Their phone line, thought burned in the fire, was determined to have been cut first. Both of their trucks failed to start in the following days. Officials suspected that someone had tampered with it. A ladder from the home had gone missing and was later found at the bottom of a nearby embankment. And experts believe that the fire was not nearly hot enough to completely incinerate bone. All of this suggests premeditation and possibly kidnapping. The Sodder’s surviving children have always maintained that the five missing kids were indeed kidnapped and are still out there.

On the night of August 8, 2013, Brandon Lawson argued with his girlfriend Ladessa, left their home in San Angelo, Texas, and phoned his father that he was coming to visit him in Crowley, Texas, a few hours away. Lawson never arrived and was never seen again.

He was heard from, though. In the middle of his trip, Lawson phoned his brother Kyle to say that three people were “chasing me out of town” and that he had run out of gas. More calls followed. One was to 911, in which Lawson said in part that he was “in the middle of a field” and “there’s one car here. The guy’s chasing (inaudible) to the woods. Please hurry!” Some claim gunshots can be heard in the audio background. Chillingly, both Kyle and a sheriff’s deputy arrived at the scene of Lawson’s abandoned truck and received a call from Lawson saying, “I can see you; I’m right here” though neither man could see Lawson and he would never be seen or heard from again.

Jennifer Kesse vanished on January 24, 2006. Her home was undisturbed, and her clothing and toiletries suggested that she had gotten ready for work that morning as usual and left uneventfully. Her car was not in her driveway but was found at an apartment complex a mile away. Luckily, security cameras at the complex caught video of the man who dropped her car off there, presumably involved in her disappearance.

But unluckily for detectives, the video did not show the man’s face. This was because the security camera worked by snapping photos every three seconds. The man shown is walking behind the complex’s fence, and every shot of his face just happens to be behind a different fencepost. Chances of him just happening to have the perfect pace to accidentally hide his face behind a series of posts in exact three-second intervals is low. One reporter called him “the luckiest person of interest ever.” Kesse has never been found.

The lost colony of Roanoke is one of America’s oldest mysteries and involved the disappearance of an entire colony of 115 people. In its first year, the colony struggled with starvation, causing settlement leader John White to sail back to England to retrieve supplies. When he arrived back at Roanoke three years later, he found the colony deserted.

A cryptic piece of evidence at the scene was the word “Croatoan” carved into a tree. White took this note to mean that the colony had relocated to nearby Croatoan Island, though nobody ever found settlers there. Numerous expeditions searched for the settlers over the following decades, all to varying degrees of failure. Numerous theories have been proposed involving massacres by natives, relocation to an unknown location, and (probably most commonly) intermingling with native settlements. In the early 1700s, English explorer John Lawson visited Croatoan Island (now known as Hatteras Island) and reported that the natives there claimed to have white ancestors, a claim supported by the fact that several of the natives had grey eyes- a uniquely European feature.

Probably the most famous disappearance of this century is that of Malaysia Airlines Flight 370, which disappeared somewhere between Kuala Lumpur and Beijing, China. On board the flight were 227 passengers and 12 crew members. Although search teams found some debris in the Indian Ocean, no one has ever found the bulk of the large aircraft, including all 239 people on board.

Conflicting initial reports and a lack of concrete evidence have led to a ton of theories as to what happened to the plane. These include hijacking, crew suicide, being shot down by world governments who then covered it up, and even a meteor strike. And of course, the usual UFO abduction theory persists. At one point, it was even suggested that a mini black hole had swallowed the plane.