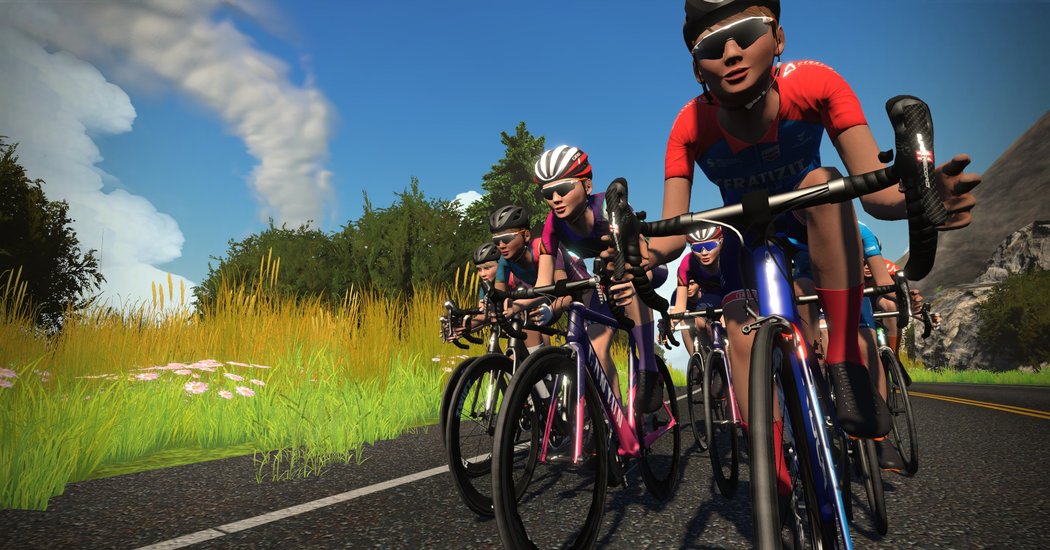 The Tour de France, like manymajor sporting events, is on hold because of the pandemic. But last weekend, I watched cartoon likenesses of professional cyclists fighting to win a virtual version.

Connected to the Zwift virtual world for running and cycling were the real-life athletes riding stationary bicycles in their dining rooms, garages or backyards. When they had to ride up a steep virtual French mountain, I watched a split-screen video feed of their real-life faces straining and their heart rates soaring. It was genuine fun.

Most of you probably aren’t cycling fans like me. But this sport, mostly associated with cheating and rich Europeans, has figured out virtual competitions that are (almost) as inviting as the real thing for athletes and spectators. Virtual cycling offers lessons for how other sports can appeal to fans leading increasingly digital lives.

What surprised me most was how seriously the cyclists seemed to be taking a not-real Tour de France. There were no medals or prize money at stake, yet people at the top tier of their sport were thrashing themselves to win a video game.

“We’re all competitors, and this pandemic has taken that opportunity away from us,” said Lauren Stephens, who won a mountainous virtual Tour de France women’s race on Sunday. “To be able to compete at this level in your living room — for me, it’s pretty enjoyable.”

On race day, Stephens woke up early in her Dallas home and set up in her dining room, which was filled with stationary bicycles, a 40-inch television to watch herself on Zwift, three fans and a dehumidifier to stay cool. (Cycling indoors is sweaty.) During the race, Stephens and the rest of her Tibco-Silicon Valley Bank team used the messaging app Discord to hash out strategy.

In a way, cycling is an ideal virtual sport. Compared with a basketball team, it’s easier to translate what an individual cyclist or runner does at home into real-world road speeds. And cycling is already technology obsessed. Even many amateurs ride on Zwift have gadgets to measure their vital statistics, and use apps to compare themselves with others who rode up the same hill.

I hope some of the fun elements of virtual cycle racing will mesh with the real thing. It was great to track the pros’ vital statistics like power and heart rates. And even Stephens said the close-up shots of the pros on Zwift showed viewers the pain of racing that TV footage doesn’t capture.

Best of all, without having to travel to France, more than 44,000 mortals got to ride the same virtual Tour de France roads as the professionals. (It took me nearly two hours to cycle the course that Stephens finished in under 48 minutes.)

I bet racecar fans would get a kick out of driving on the Daytona 500 course, and soccer fans would love to see their favorite players’ heart rates as they raced down the pitch. I got to do the equivalent of both.

After I wrote earlier this week about the potential dangers of products sold on Amazon by a sprawling network of merchants, Christina Barber-Just in Leverett, Mass., emailed with a follow-up question:

If I’m careful to buy directly from Amazon — not another merchant — can I be assured that I’m not going to get a counterfeit product?

Good question. You can never be fully assured something isn’t counterfeit, but retailers like Amazon are legally accountable for the products they sell. In theory, that would make a company more careful about what it sells.

One of the risks of buying from outside merchants on Amazon is that it’s a legal gray area whether you can sue Amazon over a fake or dangerous product it lists on its site but doesn’t sell itself.

If I’m shopping on Amazon for a product that could be dangerous if it’s counterfeit or unreliable — vitamins, children’s toys or makeup, for example — I almost without exception make sure I’m buying an item sold by Amazon itself rather than one of the millions of merchants that sell on Amazon.

Here’s what to look for: On the right-hand side of Amazon product pages, underneath the “buy” button there is text that explains the product “ships from and sold by Amazon.com.” That means Amazon bought the item from the product manufacturer and is reselling it, just like any conventional store. That’s what I want.

I tend to keep hunting if the text says a product is “sold by” a different company. There is similar advice with more detailed safety tips here from a Wall Street Journal columnist.

Online at Walmart and Target, I also mostly buy merchandise sold directly by those companies rather than outside merchants — although compared with Amazon, outside merchants represent a small percentage of goods those retailers sell online.

It’s Friday. You deserve to watch a baby hugging a dog.

Matt Gaetz Is Planning To Run Anti-CNN TV Ads Amid Federal Sex Trafficking Probe
Keras Tutorial - Beginners Guide to Deep Learning in Python
The ‘How To Get Sh*t Done’ Weekend Seminar!
Lowe's Doubles Down On Contractors With Store Revamp As Home Improvement Spending Booms
Most European countries should be on 'green' travel list next month, says easyJet boss
Why Practical Skills Matter More Than A College DegreePick the Brain
Proposal: Student Loan Cancellation For These Borrowers, Even If They Don’t Meet Any Requirements
UK's woodlands pushed to crisis point by a 'barrage' of threats
Autodesk To Acquire Cloud-Based PLM Software Firm Upchain
Top 10 Largest Aircraft carriers in the World
Share
Advertisement