A mortified wedding guest has revealed how she witnessed the mother-of-the-bride ruin a wedding by demanding the bridal suite for herself and arriving late so she could walk down the aisle in front of everyone.

The woman, nicknamed Linda, even dismantled the bride’s bouquet to decorate the purposely ‘naked cake’ – causing it to tip to one side.

Linda’s dreadful behaviour was described in a story on a wedding shaming Facebook page by the groom’s daughter and Linda’s step-granddaughter, from Birmingham.

The young woman revealed how Linda was remembered for all the wrong reasons at the wedding, held four years ago. 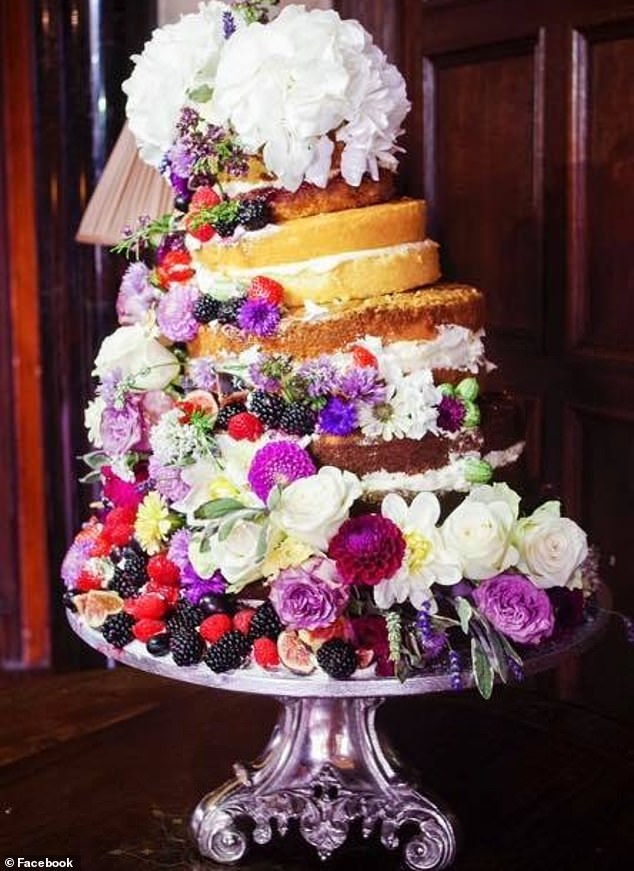 A mortified wedding guest has revealed how she watched on as the mother-of-the-bride ruined a wedding, demanding the bridal suite for herself and dismantling the bouquet to add to the cake because she thought it looked too bare. The heavy flowers made the cake lean to the side

‘She constantly made everything about herself,’ the young woman said. ‘The wedding was held at a large country house that had been rented for the weekend. Linda and her husband ended up sleeping in the bridal suite, as she kept complaining about her room.’

And the list of complaints about the elderly woman kept coming. She had planned to make an afternoon tea for all of the guests the day before the wedding – as a gift to the bride and groom – but didn’t.

‘On the day, with 50 hungry guests, she basically decided she couldn’t be bothered to do it anymore and went to hang out in her room,’ the young woman said.

Then Linda was late to the wedding – which was held at the house where she was staying.

‘She wanted to walk down the aisle,’ the daughter of the groom said, adding she was embarrassed for her wonderful stepmother. 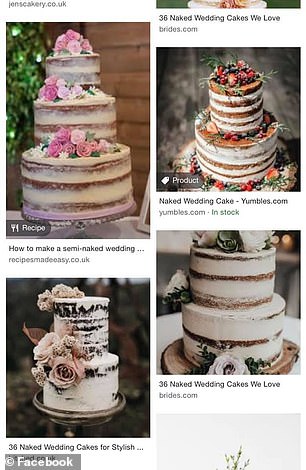 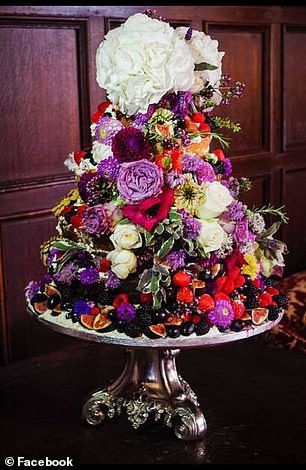 The young woman shared this image on the Facebook post to demonstrate how the bride wanted the ‘naked cake’ to look, before Linda’s meddling. Right: how it looked after Linda got her hands on it

The young woman said ‘the icing on the cake’ was Linda’s offer to decorate the wedding cake, which only needed the pre-ordered edible flowers to be placed on top.

The bride had made the centrepiece herself and wanted the ‘naked’ wedding cake look.

‘Did she create the elegant, naked cake that my parents wanted? Did she use the expensive edible flowers that had been specially ordered?,’ the young woman said.

‘No and no,’ she declared before sharing pictures of the cake.

Should Linda be uninvited from future weddings?

Linda had dismantled the bride’s bouquet to decorate the cake.

She loaded the beautiful but heavy flowers onto the cake, completely covering one side.

The weight of the flowers made the cake tip sideways – and ruined the less-is-more, naked cake vision imagined by the bride and groom.

People in the wedding shaming group were shocked.

‘Hold up, she dismantled the bride’s bouquet?!’ one woman asked.

Another woman said the cake would have been contaminated by the flowers and had the potential to make the guests sick.

‘Also let’s talk about how disgusting the cake looks,’ she added, clearly turned off by the mountain of flowers.

Another woman asked to see Linda’s chosen outfit for the day to see if the image she had in her head matched the reality.

But another woman defended the cake. ‘People love frosting. Naked cakes make it look like you ran out and is a trend started by people who hate happiness,’ she said, boldly.

Another asked if the bouquet was ruined before or after the ceremony, while one woman suggested if Linda wanted attention so badly she should renew her own vows.

Another joked that it was a ‘step-grandma gone wild’ moment while one woman said it was a good waste of cake, flowers and a parent.