People in their 40s will be invited for their Covid-19 vaccinations from tomorrow after the Government hit its target to inoculate priority groups.

Those in their late 40s are expected to get their jabs first as the next phase of the rollout kicks off after a ‘record-breaking day’ for second doses yesterday, with figures showing 475,230 vaccinations in the previous 24 hours.

The Government had promised that all 32million people aged over 50 and younger people with chronic conditions would be offered vaccines by April 15.

But the target is expected to be reached two days early, prompting new appointments for younger people.

Bookings will first go to people aged 49 before younger people become eligible later this month. Scientists are also considering whether to offer priority vaccines to regular travelers who are exempt from quarantine rules.

Diplomats, Premier League footballers and hauliers could be among those receiving jabs earlier than scheduled, according to the Times.

Meanwhile, doses of the Moderna vaccine are due to become widely available in England this week. Approval for the single-shot Janssen jab, of which the UK has ordered 30million doses, is also expected soon. 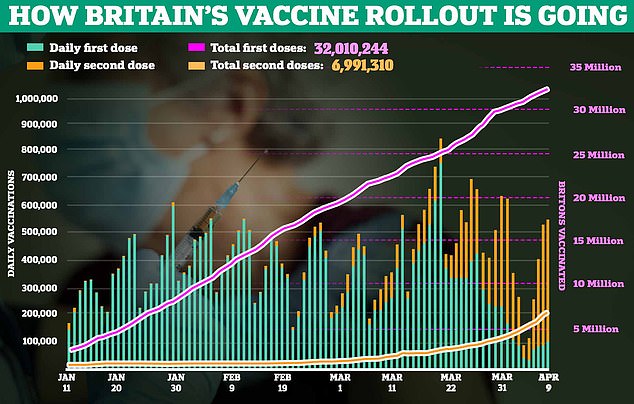 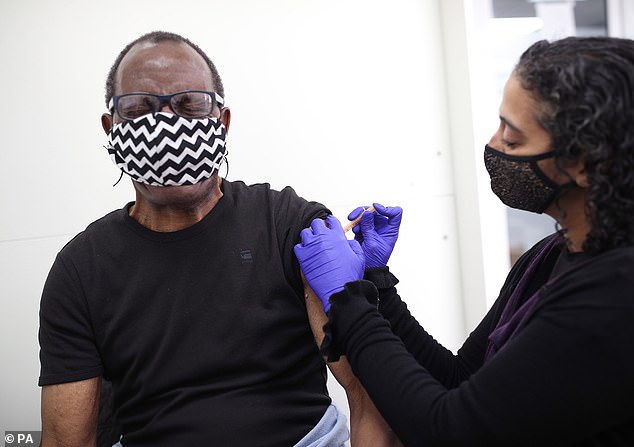 Paul Jinadu, 79, is given his second dose of the Oxford/AstraZeneca coronavirus vaccine, at Copes Pharmacy and Travel Clinic in Streatham, south London, April 9, 2021 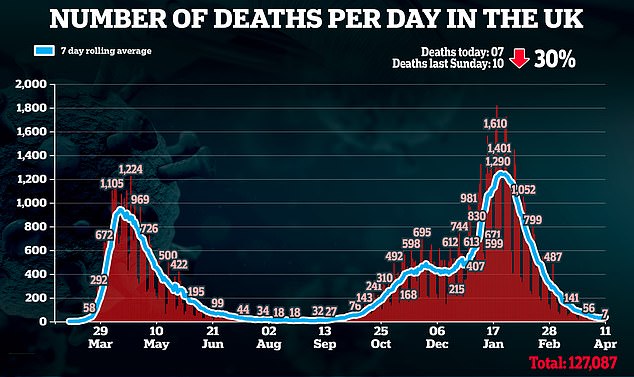 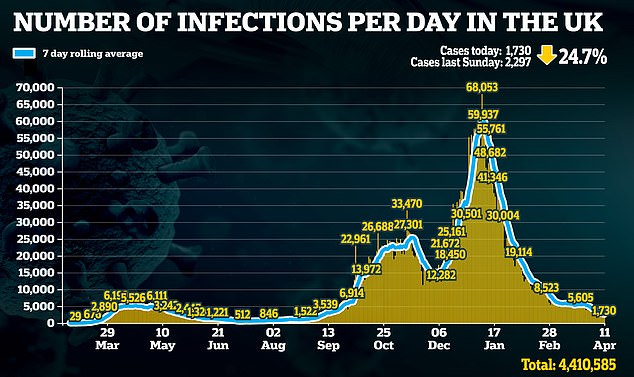 Risk of two fully vaccinated people catching Covid from meeting up indoors is ‘tiny’ at just one in 400,000, scientists say

Professor Tim Spector, of King’s College London, told The Telegraph the chance of catching an infection while indoors with another vaccinated person is one in 400,000.

His claim comes as the Boris Johnson faces pressure to accelerate his roadmap out of lockdown.

Latest figures show more than 50 per cent of England’s population are in areas where there are virtually no new Covid cases at all.

Despite the promising figures, last week Boris Johnson gave a Downing Street press conference, at which he said ‘we see nothing in the present data that makes us think that we will have to deviate from that roadmap’.

Professor Tim Spector explained the risk of catching a symptomatic infection between two vaccinated people is less than the risk of developing a blood clot from the AstraZeneca vaccine.

With more than 20 million Britons receiving the Oxford-AstraZeneca vaccine so far, there have been 79 cases of rare blood clots – and 19 deaths – linked to the jab.

The figures are equivalent to one in every 250,000 of those vaccinated suffering from a clot – and one in a million dying.

Similarly, the chances of picking five winning numbers in the National Lottery is more likely, with the odds of that happening being one in 144,415.

Spector professor of Genetic Epidemiology at King’s College London said: ‘The Prime Minister recently told us that two people who have been fully vaccinated really shouldn’t meet because it wasn’t 100 per cent safe.

‘I want to give it some context. It all depends on how much virus is around in the country and currently with rates of one in 1,400 for someone who has been fully vaccinated, according to our data and the trial data, it suggests they are at a 20th of the normal risk, which means their risk is about one in 28,000.

‘So if they’re meeting someone with equally low risk the chance of those giving to each other are really absolutely tiny.’

Government sources told the Times that everyone in the priority groups had been contacted two weeks ago, with recent days devoted to encouraging the hesitant to come forward.

Efforts are continuing to ensure maximum take-up in a group that accounted for 99 per cent of Covid-19 deaths and about 85 per cent of hospital admissions.

However, a period of national mourning for the Duke of Edinburgh means that Boris Johnson will not be able to trumpet the achievement at a press conference as originally planned.

The Joint Committee on Vaccination and Immunisation (JCVI) is due to issue its final advice on the second phase of the programme early this week.

Draft guidance issued in February said that phase 10 of the rallout would be people aged 40-49, followed by those aged 30-39 and then those aged 18-29.

Last month, SAGE concluded that border controls would slow but not prevent importation of new variants from places where they are more common.

It comes as Mr Johnson yesterday urged the nation to ‘behave responsibly’ when pub gardens reopen and restaurants resume outdoor dining in a major easing of England’s coronavirus lockdown.

Shops deemed non-essential will also reopen today, as will hairdressers, indoor gyms, swimming pools, nail salons and zoos in another stride back towards normality.

However, social mixing indoors will remain heavily restricted, with around two in five adults yet to receive their first dose of a Covid-19 vaccine and the vast majority yet to get both.

The Prime Minister urged caution during the ‘major step forward’ as a scientist advising the Government warned the rules must be followed to minimise a possible rebound in case numbers.

‘I’m sure it will be a huge relief for those business owners who have been closed for so long, and for everyone else it’s a chance to get back to doing some of the things we love and have missed,’ Mr Johnson said.

‘I urge everyone to continue to behave responsibly and remember ‘hands, face, space and fresh air’ to suppress Covid as we push on with our vaccination programme.’

The fanfare for the easing of restrictions has been muted by the national mourning for the Duke of Edinburgh.

Mr Johnson postponed his celebratory pint and Government communications have been pared back to essential messages after Prince Philip’s death on Friday at the age of 99.

Meanwhile, Wales will also enjoy renewed freedoms from Monday, with non-essential retail reopening and border restrictions eased to permit travel again with the rest of the UK and Ireland.

Remaining school pupils will return to face-to-face teaching in Wales and Northern Ireland, in moves being echoed in Scotland as pupils return from their Easter breaks.

The ‘stay at home’ order in Northern Ireland will also end as the number of people permitted to meet outdoors rises from six to 10.

Professor Peter Horby, chairman of the New and Emerging Respiratory Virus Threats Advisory Group (Nervtag), told Times Radio: ‘The watchword has got to be caution really.

‘It’s not clear exactly when or how big it will be, but there is, I think, inevitably going to be a bit of a rebound in the number of cases when things are relaxed.’

The Oxford University academic said the vaccination programme will minimise hospital admissions and deaths but warned it will not be completely effective.

‘Now the extent of it really depends on how well we comply with the ongoing restrictions so we really have to take this step by step,’ he added. 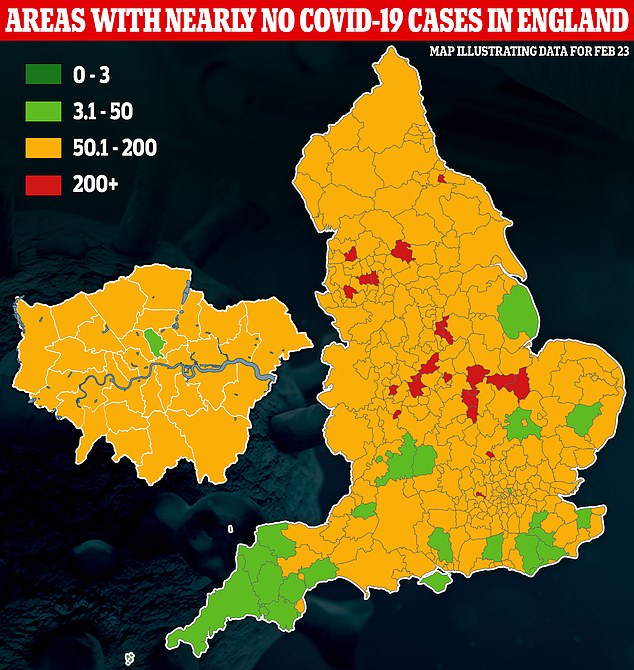 BEFORE: More than 50 per cent of England’s population are in areas where virtually no new Covid cases at all. Pictured: The rolling seven-day average cases on February 23 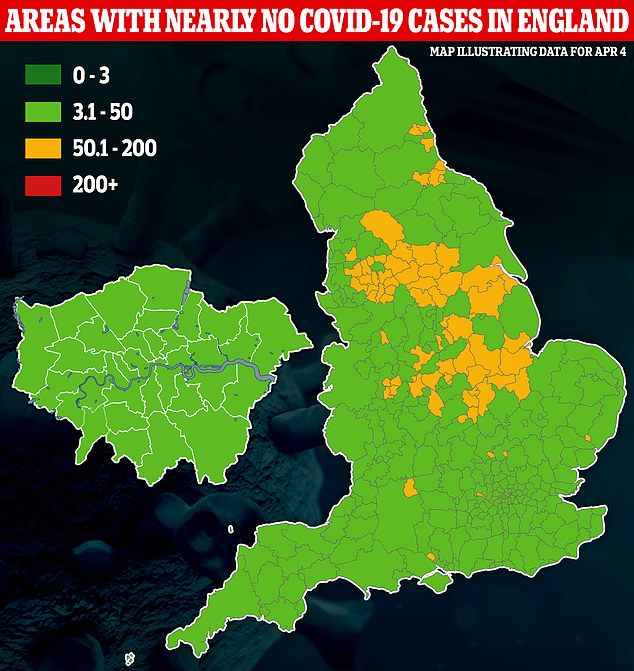 AFTER: Some 4,307 areas – with a total population of 34.5 million – have had so few Covid cases that Public Health England has not published their data for a month to protect the identities of the few people with positive tests. The neighbourhoods – including parts of Devon and Cornwall – could have had two new cases but likely had none in the week up to April 4. Pictured: The rolling seven-day average cases on April 4 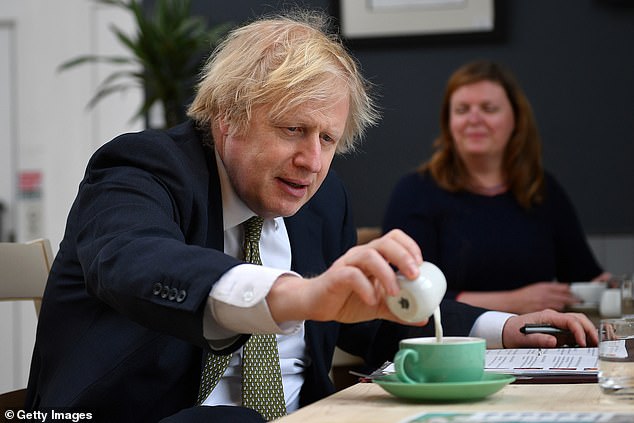 The next step in Boris Johnson’s lockdown exit roadmap will see pubs, bars and restaurants allowed to welcome back customers outside but only if there is table seating

‘I think we can be joyful and enjoy the freedoms but we’ve still got to realise there’s still a large number of people who’ve not been infected or vaccinated and so they will be at risk.’

In England, pubs and restaurants have been making changes during lockdown to maximise their ability to serve customers outside.

But the British Beer and Pub Association estimates that just 40% of licensed premises have the space to reopen for outdoor service.

The previous 10pm curfew rule and the requirement to order a substantial meal with a drink have been scrapped, but social distancing must be observed.

Domestic holidays can resume to an extent, with overnight stays permitted in self-contained accommodation, such as holiday lets and campsites where indoor facilities are not shared. 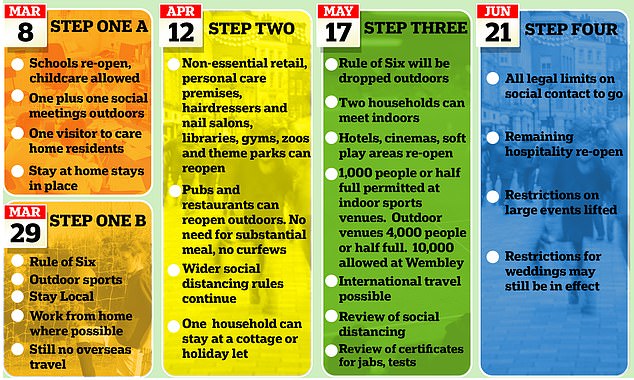 Non-essential retailers can reopen tomorrow, with salon owners claiming there has been an ‘explosion’ in bookings from people looking to get haircuts or have their nails done 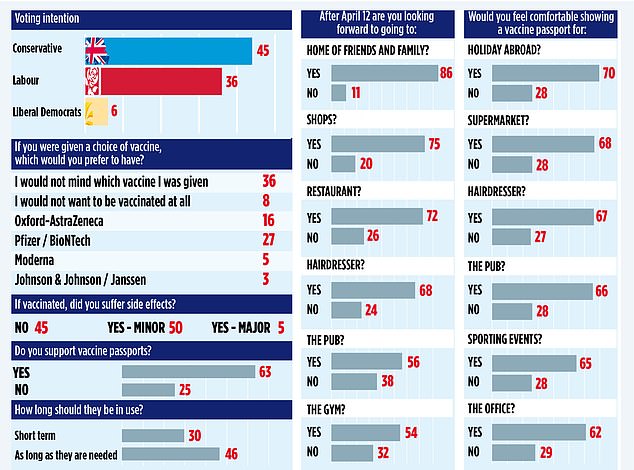 An exclusive Mail on Sunday poll has found the use of the vaccine passport documents was backed by 63 per cent of respondents, with 25 per cent opposed

But these can only be used by members of the same household or support bubble.

International holidays remain banned until an unknown date, amid a row over the cost of testing.

People will not be allowed to visit each other’s homes, with socialising indoors still prohibited outside support bubbles.

It will be the third in a series of easings since the third national lockdown was legally imposed in England on January 6.

The next significant date is May 17, when socialising indoors will be permitted under the ‘rule of six’ – if the Prime Minister judges that the vaccination programme is safely breaking the link between infections and deaths.

After three months of full national lockdown, the Government said on Sunday that a further seven people had died in the UK within 28 days of a positive Covid-19 test. Another 1,730 lab-confirmed cases were also announced.

Around 61 per cent of adults have received at least one dose of the vaccine, according to official figures suggesting that more than 32 million people have received a jab. More than 14 per cent have had both doses.

10 Ways Employers Can Reduce Stress in the Workplace
Baby gorilla claps and dances around in front of visitors at Czech zoo in Prague
Interview with Isaac Mashman, Founder Mashman Ventures
Protests Erupt Near Minneapolis After Police Fatally Shoot Black Man In His Car
Changes to the Online Marketing Landscape We Can Expect to See in the Next Few Years
10 Weird Place Names And The Stories Behind Them
Setting A Budget, Renting Self Storage, and More: Tips for Planning a Successful Home Remodeling
BAFTA Awards: Nomadland and director Chloe Zhao take top honours and make history
BTS’s ‘Dynamite’ Breaks A Tie To Become The Third-Most-Liked YouTube Video Of All Time
Harry Maguire Deserves More Respect At Manchester United
Share
Advertisement